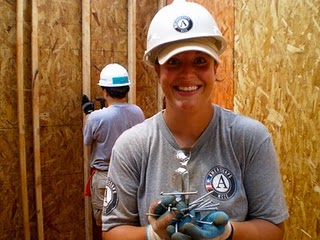 My daughter joined Americorps this year so I think that makes me an Ameri-Mom. Kari is in the NCCC Corps, which states its mission as:

"The mission of AmeriCorps NCCC is to strengthen communities and develop leaders through direct, team-based national and community service. In partnership with non-profits—secular and faith based, local municipalities, state governments, federal government, national or state parks, Indian Tribes and schools members complete service projects throughout the region they are assigned."
"Drawn from the successful models of the Civilian Conservation Corps of the 1930s and the U.S. military, AmeriCorps NCCC is built on the belief that civic responsibility is an inherent duty of all citizens and that national service programs work effectively with local communities to address pressing needs." 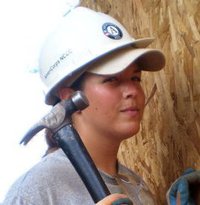 She is stationed in Vicksburg, Mississippi and will be involved in 4-6 projects during her term of service. She worked with Habitat for Humanity in Alabama and will be working with another house building program in New Orleans for two months before she gets to come home for Christmas.

She is learning so many new skills, meeting new people, working hard and seeing new parts of the country. She works out a few days a week, cooks supper for her team every 10 days [each team member takes a turn cooking supper], works Tuesday through Saturday every week, and then may do additional volunteer hours on Sunday or Monday.

These young people work hard. They must serve the full ten months and complete 1,700 hours of community service, including 80 hours of independent service. When they complete the program they receive an education award to help with college expenses.

At Kari's first long term project, the housing the team members spend their evenings doing various things--there isn't any internet. Kari said she has spent some evenings playing her guitar and crocheting.


So far I am impressed with what she tells us. It seems like the program is well organized and the teams are doing lots of worthwhile projects.
Here are a few more photos:

They went down to New Orleans during the commemoration of  the fifth anniversary of Katrina and built a privacy fence for Charlie. Kari liked New Orleans. it is not all work and no fun however. They have seen some local sites and one weekend a few of Kari's team drove from Alabama to New Orleans to site see and relax. 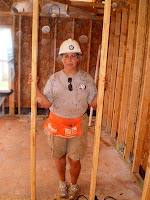 I have to say, I miss my girl. Even though she has not lived at home for a couple of years, we saw her regularly, but now it has been over two months and I am anxiously waiting for her Christmas break. I know that various Americans are benefiting from the hours and hours of hard work Kari and the other young people are doing.  They are serving their country with an organization that most people don't even know exists.
They are serving by working hard and though it is also hard emotionally to be an Ameri-Mom I am proud of my Ameri-Kari and pray that this year will be all she hopes it will be and that she will come home ready to reach her dreams.
Take care of yourself Kari, we miss you.
Love,
Mom