Today Bob and I and our good friends Linda and Todd went to Midway KY for a fall craft festival. Midway, is the town midway between Lexington and Frankfort by rail. In the early days, when rail was the way to travel, it was the stopping off point between the two towns. Here you can see the tracks leading to Lexington. The train tracks run right down the center of town, so that there are stores and shops on each side of the train tracks. Very unique and quaint. 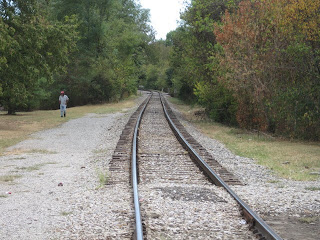 Not only is it right in the middle of the Bluegrass, but it is also right in the middle of horse country. To get there we drive through some of the pretties scenery in the Bluegrass area. The horse farms are magnificent, with fountains in the ponds, dry rock fences, barns that are nicer than many churches, and acres and acres of mowed bluegrass with black 4 plank fences. Queen Elizabeth keeps horses at one of the farms, but I am not sure which one.
Here we are with Todd and Linda. Bob got his favorite treat, cotton candy and Todd was thrilled to get a quart of good Kentucky sorghum--they were making sorghum right at the fair. It looks kind of nasty when they are making it, but when you put it on hot biscuits, or in granola, it is amazing! 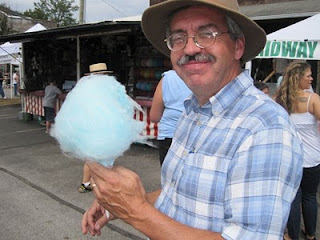 Bob was so happy with his cotton candy. He is funny because he really doesn't have much of a sweet tooth, but his eyes lit up when he saw that the Midway Woman's Club was making it fresh. A nice lady in that booth took the photo of all of us together.

We ate at Darlin' Jeans Apple Cobbler Cafe which has the best Hot Browns in Kentucky. They are fantastic and we all had one. Next time I will take a photo of one and explain how to make it. 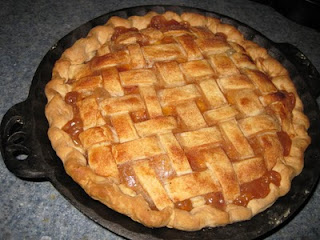 oo full, but when we got home, after I had a nap, I made this homemade peach pie in a cast iron pie pan.

It is pretty easy because I made the crust a few weeks ago and froze little crust rounds and just rolled them out today. I froze peach pie filling a couple of weeks ago when I had some amazing peaches, so I just nuked it for a minute or two, put it in the crust and had a hot fresh pie in about an hour.

I will include the recipes below.
Here is the recipe for the crust

PEACH PIE
3 ½C peaches sliced, drain juice
¾ C sugar
¼ C flour
½ tsp tapioca
2t lemon juice
¼ t cinnamon
dash nutmeg
Mix together and let set while you prepare a 2 crust pastry. Put in bottom crust, put in filling, dot with butter, put on top crust. Bake 400° for 45 minutes, longer if frozen. I usually make about 4x this amount the freeze enough for one pie in a quart sized freezer bag. When I make, I make pie crust, dump in the filling and then usually sprinkle about 2-3 tsp of flour over top of the filling and mix in a little bit with a fork, dot with butter and then put on top crust. I sprinkle sugar or cinnamon and sugar on top and bake at 425 for about 40-50 minutes, till brown and bubbly.
------
This is the report from Midway Kentucky..
Where the cotton candy is blue
The sorghum is fresh
And all the couples are above average.
Take care,
Jill
Posted by Jill in Kentucky at 8:58 PM