Bologna Salad--You have got to be kidding...

Today I had a bunch of chores to do and found myself out at the farm around lunch time. I decided to get a sandwich at our favorite lunch place in Harrodsburg, KY. It is a bulk food store with a nice deli and a lovely gazebo outdoors to sit at while you eat your sandwich..

But, before I go any further, there is something you should know about me. I have a strong aversion to bologna--ring, pickled, cheap, expensive--it does not matter. I hate the smell, the texture and the taste. In fact, if I came to your house and all you had was bologna and I was nearly starving I would probably tell you I was allergic to bologna and could I just have a plain crust of bread. No kidding. I HATE it. 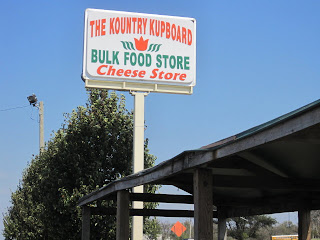 I arrived at the Kountry Kupboard and went straight for the deli counter. There were lots of workmen type people waiting in line and they were obviously getting food for their whole crew because they had several sandwiches in their hands as they made their way to the check out counter.

I filled out the little pad, checking whole wheat, lettuce, mayo and tomato, smoked turkey and baby Swiss cheese. As I was waiting for my sandwich to be made I spotted some samples. As I looked closely I saw that it was crackers with a sandwich spread. I read the label [thank goodness!] and it said "Bologna Salad." UGH!! You have got to be kidding. I looked closer. Yep--that is what it was. Chopped up or ground bologna mixed with mayo, pickle relish and who knows what.

I was dumbfounded and stupefied and almost had to run outside for fresh air. Bologna Salad. Who ever thought of this and why? What manner of man would each such? I cannot imagine.

At any rate my sandwich came and as you can imagine, I could only eat half of it [see photo below]. Too bad Bob was at home working. Why anyone would chose Bologna Salad over this magnificent creation, is beyond me. 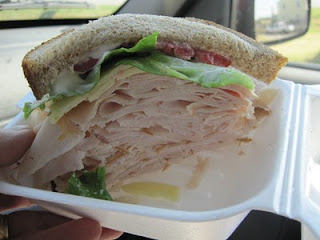 Take care, and may all your salads be lettuce, spinach, chicken, ham or some other wonderful thing-anything but bologna.

Take care,
Jill
Posted by Jill in Kentucky at 5:47 PM