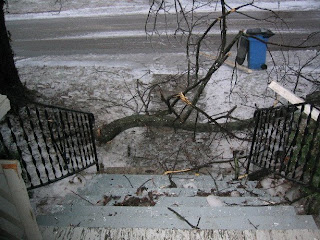 Across the street are Seminary Parking Lots. To the right of my house is a seminary parking lot. To the left of our house we have one house with fantastic neighbors, and next to them seminary parking lots. It used to be a neighborhood, but not anymore. But, that is a topic for another day.

We had a big ice storm a couple of days ago. Lots of trees and limbs down, many people without power and phone and so forth.

At any rate, some seminary students parked in the lot across the street today. Now these parking lots are really no more than fields with the big stuff removed [including all the flowering trees—again a topic for another day] and some gravel scattered about. The gravel is mostly gone now, sunk into the Kentucky mud

Kentucky mud is mostly clay and is very sticky and when some gets on your shoe you are afraid you stepped in a dog pile. So, at any rate, Kentucky mud sucked most of the gravel under the parking lots. Today, as every day, no one scrapes or plows or takes care of the lots. The brave [or not too swift] parked there today. Did I mention that they are not flat and that to get out of the parking lot across the street you have to come up an incline-and remember no gravel, just slippery Kentucky mud with ice and snow over it.

I noticed a man in a PT Cruiser trying to get out, but he couldn’t. I was home alone, so I went to see if I could help. He was getting more and more stuck because he was spinning his tires on the mud/snow/ice mix and had zero traction. I went back in the house to get some kitty litter to put under his tires and was hoping for someone to come along who could help push just a bit. With another person to push, we could have given him that little extra UMPH he needed to get his front tires on the blacktop street. Since his car had front wheel drive, once his front tire grabbed the street, he would be fine. 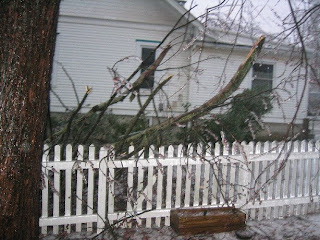 So, I tossed down some litter, so he could back up and get another run at it, when two tall, young seminary students came out to the parking lot. They were both about 6 ft tall and no older than 30. Perfect! They looked our way, watched for a minute, got in their car and tried getting out a different way. They got out, rolled down their window and said, “You might want to try over here.” And they took off!

OK, I might not be a Samaritan, and the guy in the car [who by the way was probably at least my age, if not older—probably closer to 60] wasn’t beaten and left for dead, but the similarity was striking. Here were two young strong seminary students—going into ministry—who could not take a couple of minutes to give the guy’s car a quick shove into the street!!! Who could not be bothered! My mouth dropped open as my hand held the 20# bucket of kitty litter.

I did help get the guy’s car out. As he was leaving, he rolled down his window and said, “If I am around in better weather, I owe you a pizza!”

I couldn’t help thinking what these guys are studying in seminary?? Obviously not what Paul told us, “Be ambassadors for Christ, as if Christ is entreating through you.” Ministry is here, it is now. It is your husband, your kids, your neighbor, the guy stuck in the snow…it is like breathing in and out. It is not something in the future that you can study for [obviously] --it is living and breathing and helping day in day out.

Take care,
Jill
Posted by Jill in Kentucky at 9:52 PM