As a child my history teacher dad took us on all kinds of road trips. We drove up to Alaska, down to Veracruz, Mexico and from coast to coast, stopping at historical landmarks, museums and spots of interest along the way. You know those pyramids in Mexico where human sacrifices took place? I have climbed them. I have seen the wagon wheel ruts put in solid stone from so many covered wagons passing over them. The first Pony Express station--I've been there--I think you get the idea. Living and breathing history as a child, I just took for granted the many things that others only learn about in books.

What I learned though, is that while people are making history, they seldom realize it. Some people do--I mean Thomas Edison knew he was making history, so did Henry Ford and Alexander the Great. But, regular people never realize it. They go about their lives, living and working and breathing and dying, and what they do seems mundane. But later, in retrospect, we can see the impact they had on history.

I am thinking of the scribes who faithfully copied great literary works, the folks who first found out that coffee was amazing in the morning, people who charted the stars and so many more. We don't know their names in most cases, but we know what they have done. They changed history. 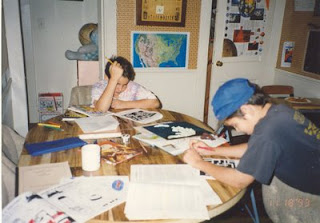 I believe that the moms and dads that sit around their living rooms and kitchen tables faithfully teaching their children are doing the same thing today. I know it can be lonely and trying and somedays we ask ourselves why we do it.


Take care,
Jill
Posted by Jill in Kentucky at 1:26 PM