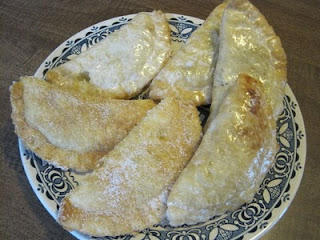 We were in Shipshewana, Indiana last week to celebrate our 35th anniversary and there was a fried pie wagon. The Amish make fried pies which look delicious, but are rather disappointing. There might be some good ones somewhere but the ones I have tasted in Indiana and in Ohio were not very good.

I do not understand why they go to all the trouble to make the crust, heat the oil, put in the filling, fry and then glaze them and yet put a sub-par filling inside. You heard me, sub-par. I would say gross, but my husband thinks they are pretty good. But, and you are not going to believe this, the ingredients actually have jello and koolaid as ingredients! You see what I mean when I say gross. I think they just use pre-packaged filling--UGH.

At any rate, when Bob saw the pie wagon his eye lit up, so I said, "I will make you good ones when we get home." Why do I say stuff like that? Well, we found some amazing peaches at the fruit market and we carted a bushel of them home. We ate a bunch--our whole family ate a bunch--and then I decided I would try my hand at making fried peach pies.

It was hard to find a recipe for fresh pies, so I improvised and they turned out delicious. I sort of combined 3 different recipes, so before I forget what I did, I decided I would blog about it so I could replicate it again.

First make the filling. It is best to make it and then cool or chill it because if you put hot filling on raw pie crust, it might melt it and then the filling will run out into the hot oil. Not good!

Filling [Make earlier in the day and cool or chill]:
Toss with:
Put in a sauce pan and add about 1/2 C of water, more if you think they will stick and heat over medium heat until it simmers and the peaches are tender. Mash with a wooden spoon to make peaches smaller. Set aside to cool or chill in the fridge.

Pie Crust [my favorite recipe from my friend Linda. This will make 4 pie crusts for regular pies. It will make enough crust for about 16 fried pies]

In a large mixing bowl combine: 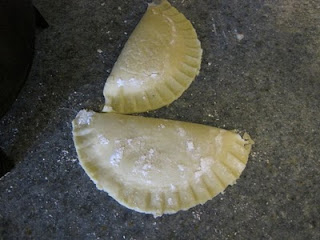 Now you are ready to make the pies. Heat at least 3-4 inches of oil to 375 degrees. While heating, roll out one of the balls of dough so it is thin. I like to put flour on my counter top and roll right on that, but a pastry board or large cutting board would work well too. 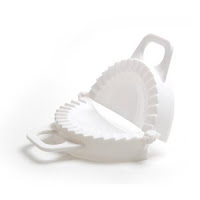 Get a saucer or little dessert plate, about 6 inches in diameter and lay on the dough and then using the back side [not sharp] of a knife trace around the plate to cut the dough into a circle. Put about 2-3 T of filling in the crust and then [and this is the secret that made all the difference between success and failure] take a pastry brush and lightly brush water on all the edges of the pie. Then flip one side over to meet the other and seal the edges. [As a note each ball of crust should make 4 pies, using 6" circles. I had to cut out two circles, then reform the crust, roll out and cut out another one, then re-roll out again to get the last circle.]

I purchased a little plastic pie sealer and it worked amazingly well. I floured it first and then laid the round pie crust in it, put in the filling, wet the edges, folded over the dough and pressed down. It worked well, but you could just take a fork and press it all along the edges and that would be fine too.
Then just drop the pie in the oil and turn it once or twice till it is evenly light brown. This took about 4-5 minutes and I fried about 2-3 at a time. 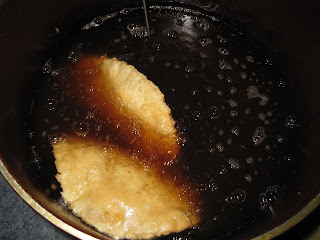 When done, remove from oil and drain on paper towels for a minute or two. We liked them best with a bit of cinnamon and sugar sprinkled on them. I dipped some in a thin powdered sugar glaze [basically powdered sugar with enough milk to make it pourable]. Either way they are amazing, but the glaze is messier to make. I put them on a wire rack when I was done so they could cool a bit.

You could use other fruit as well, but I think peach pie is my favorite.
If you want to make dried fruit pies, you basically do the same thing, but to make the filling, place 3 cups dried fruit [apples, peaches, apricots] in a large sauce pan. Toss with 3 T flour and then add 1 1/2 C water. Bring to a boil and simmer for 30 minutes. Cool and mash slightly and stir in 1/2 C sugar, 1/4 tsp ground cinnamon and 1/4 tsp ground allspice. Set aside to cool a bit and then continue on as in fresh fried pie recipe.

Let me know if you try these and how they turn out. We all thought they were incredible. I think the next time I make them I will make the crust a day or so before and put it in the fridge, each ball in a small Ziploc. Then I will just take them out about an hour before I am ready to use them. I think making the filling a day earlier would be nice too, then all I will have to do on pie-day is assemble and fry.

A little note: I made some fried apple pies today and adjusted a few things. To cut the pies out I used the lid of a 2 quart pot that was about 51/2" in diameter. If you have a pot lid between 4-6" in diameter, try using that. It is much easier than cutting around a small dish.  I  put in 2T of filling and fried as I describe above.

The filling I used was good: I combined and cooked over slow heat till the apples were soft:
4 cups chopped apples [peel first]
1/2 C brown sugar [could use white]
1 tsp cinnamon
dash nutmeg

When they were soft I stirred in 1 T flour to thicken. Then I cooled it and used as the filling. Makes 16 pies.
Posted by Jill in Kentucky at 4:54 PM 1 comment:

For those of you not interested in our cottage, I apologize. It ought to be done soon and then I can post on other topics, but right now, the building process seems to require a lot of my thoughts and energy.

We purchased the wood stove back in February, had it shipped from Vermont to Lexington in April and then we trucked it from Lexington to the cottage where one of the guys unloaded the crated  500 pound stove and huge chimney package with a forklift. They have resided in the barn for the past months and I have been dying to see how the wood stove looks. I couldn't un-crate it, because it needed to be crated to be hoisted with the forklift be placed in the cottage.

So, yesterday, was time to do the unveiling--or uncrating... 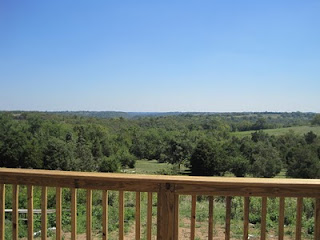 It was a lovely day and there was a nice cool breeze so sitting on the deck was a delight.

Take care,
Jill
Posted by Jill in Kentucky at 7:44 AM 1 comment: 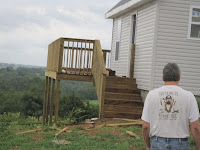 It was a rainy day today when we went to check out the progress on the house. For the first time we didn't have to go through the basement to get into the house. We went right up the steps to the deck. How wonderful! Scrappy was a bit confused, but she figured it out pretty quickly.

Posted by Jill in Kentucky at 2:10 PM No comments:

A few pictures of the cottage progress. It has been HOT, over 100 degrees with heat index. I am glad I am not out siding a cottage.

Posted by Jill in Kentucky at 3:54 PM No comments:

Posted by Jill in Kentucky at 7:35 PM No comments:

The Deck is growing...

It has been very hot here--hotter than it has been in years. But, still, a couple of faithful carpenters have been working through the heat to put the deck on the cottage. Today was a bit cooler as the sun was behind the clouds part of the day--and there is just about always a breeze up on the hill.

Hopefully they will finish the deck with railings tomorrow or Monday, then get the stairs in, the porch roof on, the siding on and then finish the inside work.

Houses, even little houses, have a lot to them. I will be so happy when this one is done.
Jill
Posted by Jill in Kentucky at 8:06 PM No comments: 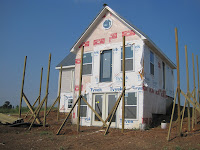 The deck posts from the front of the house. Also, the top middle door is painted Shaker Blue. 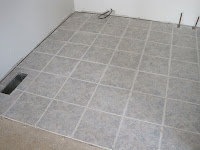 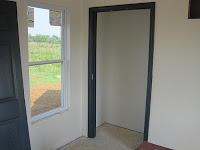 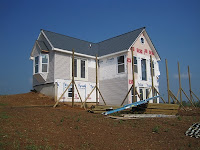 deck posts in at front of house, from left side. 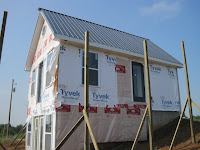 Deck posts on side of house. 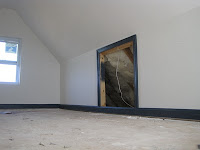 Deck posts from bay window side of house.
View from front yard.

Slow but sure--it is coming along.


Jill
Posted by Jill in Kentucky at 9:16 PM No comments: