I live in Mayberry...

Well, maybe not literally, but it sure feels like it.

Last Friday night my husband, father-in-law and I went up to the local IGA for the Friday night Bluegrass Concert.

Yes, you heard me right. Leonard, the owner, moved the banana table to the side, set up some chairs and then the band came in. They set up speakers and microphones by the deli and then they were good to go.

I am not kidding! I was laughing to myself most of the time because it tickled me so much. And you should have seen the poor folks who were trying to fight their way through the audience to buy apples and salad in a bag. I saw one lady pushing her shopping cart down the aisle while doing a sort of down-home stomping dance [remember Jed Clampett?]. 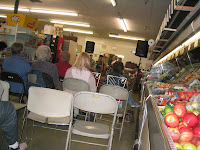 To be fair, the music was really good. Besides Crazy Joe Gerlach on the Dobro, there were other musicians on the bass, the guitar, the banjo and the mandolin. It was great.

Drew Scaggs--son of Ricky--played guitar and the musicians kept trading places and trading being the lead singer. They were all very good. It was kind of amazing that this high quality of music was being played in the produce section of IGA. People were smiling and clapping and were all in generally good humor.

Some folks brought their own chairs so there would be enough seating. Also, there were hotdogs available in the deli for $1.00, chili dogs for $1.50. Crazy Joe suggested people buy the chili dogs if "you aren't kissing anyone tonight."

It was really a little slice of Americana only 2 blocks from home. More Friday night concerts are planned and I can honestly say I look forward to getting a front row seat right next to the cabbage!

I have to say that once I saw what a treasure this was, my great husband went home to retrieve my camera. Thanks, Bob, for making this blog post seem a bit more real.

[Photos: top, Drew Skaggs singing, see the deli in the background?; middle photos showing the seats along the produce section-one of the empty ones is mine; bottom a photo of all the folks in chairs].
Posted by Jill in Kentucky at 6:46 PM