Guido and my Keys...

Do you remember when I was almost a movie star? My Jeep is awesome and has one of those remote keys that unlocks it at 50 feet! That is important because it only has one key hole in the whole vehicle, so if you don't have that key you have to always open the driver's side door first, then unlock the other doors/trunk area. Kind of a pain if you want to put groceries in the back.

Well about 6 weeks after I got my Jeep we had some wonderful friends visit for a few days. They have a few kids, all under six, and we just love them like family. The little boys, one about 11 months the other about 2, loved playing with our basket of match box cars. 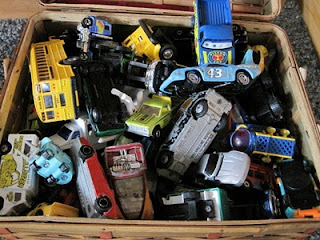 I will digress for a minute to say that our basket of match box cars has been a favorite of kids, all kids, for the past 30 years--and yes, some of the cars are that old. Any kid who has ever been to our house before will always head right to the basket of cars. Any kid who has not been here before will soon be introduced and will spend quite a bit of time with the cars before looking up to see what else is going on. So, if you have limited money and want to spend it well, buy a match box car or two once a month and you will soon have long-term quality entertainment.

OK, back to the story. The boys all played very nicely and did really well in our limited space. The little boys were into hiding the cars. You know, they would put one in your shoe, or under a magazine, then "find it" and laugh. It was quite entertaining, and kept them busy for a long time.

At one point, I thought about some little carabiner flashlights I had in my Jeep so I went out to get a few to give to the boys. They loved them and called them their "lasers." In no time, Mr. Bob was exploring the upstairs with the older boys and their laser lights. Lots of fun!

The next day I went to run to the store and my keys were not in the place I ALWAYS put them. I mean I always put them on the hook in my office--a habit, I never even think about it.

So, I started thinking, when did I use them last? Yep, to get the laser lights for the kids. So, I must have laid them down somewhere and maybe the little guy picked it up and hid them? We looked everywhere--turned furniture upside down, etc. No luck. In fact, a couple of months later I was convinced the little guy had hid them in the trash in my office-gone for good. Five months later I went to price a new opener. $160 PLUS programming.Well, that isn't going to happen.

I was hoping for a new one for Christmas, but I guess I didn't drop enough hints.

Fast forward to March 13th, this past Saturday morning. I was sitting in a favorite chair drinking my morning tea and for some reason, I put my hand down in the cushion and felt, felt--hmm, I pulled out THE KEYS and a little match-box type car! 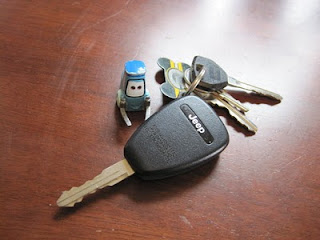 I mean, It was like Christmas and my birthday all rolled into one. MY KEYS and the signature of the one who hid them--a little car, but not one of ours, no, it was one which belonged to this favorite family. It kind of reminded me of those classy burglars who leaves a sort of calling card after they commit some crime to sort of flaunt how clever they are-- just to drive the investigating detectives crazy.

We had turned this chair upside down and were very thorough. BUT, we had not sat in it, lowering the springy bottom and then felt under the arm area. Apparently, after the little boy "hid" the keys and the toy, someone sat in the chair before he "found" them and they slid under the arm rest part of the chair. Then, when the sitter got up, the springy bottom sprung back into place holding them there for all these many months.

This was totally my fault. I should have hung the keys up when I came in the house. I called my friend to tell her the good news [they had helped search for the keys, searched through the diaper bag and other totes and such, etc.]. I sent her the picture and the kids rejoiced. One little boy said, "Oh, she found Guido!"

So, a good day was had by all. Guido was lovingly packed into a Priority Mail envelope this morning for his trip east, and I have been unlocking my Jeep from various distances for the past two days.

Guido and my Keys--you gotta love it.

Take care,
Jill
Posted by Jill in Kentucky at 11:01 AM