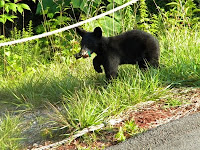 This is my sister's story, but I can't resist telling it...

My little sister was always terrified of bears. Ever since I can remember she had an irrational fear of bears. I can relate, because I feel that way about snakes. But back to Joy.

When we were kids Mom and Dad used to take us camping a lot. I mean, I thought the National Parks were my summer home. And, that is not all--we hiked and back packed. Even the littlest of us hiked. I remember Dad fixing me up with an old army packpack when I was seven. There really weren't specific kid backpacks like there are now, so Dad had to shorten straps and make other adjustments.

When we were hiking, sometimes a couple of us kids would hike a bit faster and hike on ahead of Mom, Dad and Joy. Then Joy would start off on her own to catch up with us bigger kids. One time, and I think we were on a trail to Mt. Ranier in Washington State, Joy let out a blood-curdling scream--I think she was six at the time. We came running back down the path and Mom and Dad came running up the path to find Joy paralyzed by fear. She was hysterical because of the bear! But, it wasn't a bear-it was a stump. In all fairness it did look like a bear.

That night my dad slept with a pistol and we hung our gear from some trees because of the bears. Joy slept between Mom and Dad in their sleeping bag while I can remember scrunching down so far in my army-surplus mummy bag that I actually thought I was going to die from lack of oxygen. I had a mini-panic attack that night, but I talked my twelve-year-old self down, thought clearly, and found the face opening and breathed in the life giving cold mountain air.

At any rate, her fear of bears was well founded. Oh, and did I mention that we were sleeping on the floor in a rock camping-cave [not deep enough to harbor a bear-at least that is what my parents told me].

Later, when we moved to a house where I got my own bedroom--I was 15 and Joy was 9--{older Sister Gail was off to college-Bruce had his own room forever} many times Joy would climb into bed with me because she was afraid bears would get her [in her own room]! But, like I said, I have an irratiaonal fear of snakes, so I can sympathize. 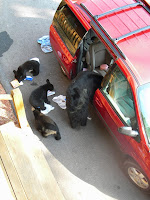 So, imagine my surprise when I got these pictures from Joy, shot with her own camera. They were down in Tennessee, taking their stuff into a cabin for a nice vacation.

Joy took these pictures of a momma bear with three cubs ransacking their mini-van. Ken [her husband] was unloading and left the sliding door open. Can you imagine? 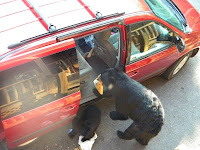 I would have thought Joy would have been crying and would have locked herself in the bathroom or something, but apparently, now that she is 40 something and has 4 children, I guess she has outgrown this fear. [Sure wish I could say the same about snakes!]


And what is up with this cub, taking up tennis? 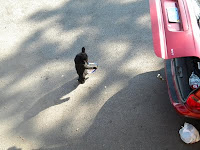 As a note, black bear populations are on the rise because mother bears are having 3 cubs routinely and up to 5 cubs at a time. Years ago, they usually had twins, and sometimes triplets. Now, triplets and quadruplets are the norm. Naturalists are questioning and studying why this is, but I think it must be the increased nutrition-eating all those granola bars! [See top picture]