What does the Bible say about... 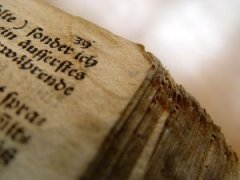 If you travel in Christian circles at all, you will see and  hear this comment in various forms a lot. People quote the Bible...in context and out of context. They spout of what they think is the truth and then add that "God said it in the Bible." And so it goes.

And I guess if we got a bunch of people together we could basically agree on what the Bible says. I mean, even if we used different versions, we could probably mostly agree what it says.

But, what does it mean?

Many, many self proclaimed Bible believing Christians interpret the Bible and then tell everyone that they believe what the Bible says, while earnest Bible believing Christians of a different flavor believe something quite different about the very same passages. If we think we are the only ones that are right, I think we will be surprised when we finally meet Him face to face.

I mean, if the Bible were so easy to understand that if you read it and believed it and followed it, then all the other believers around the world and through history would be in agreement about it. After all, they read and believe the Bible too. But, all you have to do is drive around even a small town and see the variety of Christian churches to see that simply reading and believing the Bible does not mean that you know the truth. If it did,  then why are there Baptist, Methodist, Catholic, Lutheran, Seventh Day Adventist, Anglican, Christian, Missionary Alliance and a host of other churches? They all believe the Bible, but they interpret it differently.
Take any leader/founder of any denomination and you will see that their interpretation of the Bible is not exactly the same as another leader/founder of a different denomination.Was John Wesley more or less Christian than John Calvin? Even though they all believe the Bible, and can agree what it says, what it means is another story.
And truthfully, I am pretty sure that they all have some of God's absolute truth and they all have some misconceptions or things they see dimly.

It really bothers me when one denomination, church, group or person claims to know exactly what the Bible means and they proclaim that anyone who sees it differently has gone astray or is on the wrong path. What makes them so sure?

I live next door [and actually live between the parking lots of]  a Wesleyan Seminary that offers master's degrees in Divinity, Christian Education, Missions, Counseling and a few other things. My husband graduated from that seminary and what really struck him while he was a student was that they teach their theology [thinking about God] as THE truth and kind of minimize another seminary that offers the same degrees but prepares ministers for service in another denomination.  Probably they minimize our next door seminary. Yet, they both use the same Bible, have learned professors and excellent reputations. Who's right?

God knows. And I bet He can't believe how different our beliefs are when we all believe that the Bible is His truth and we believe the Bible. And, I am convinced that there are truths and errors found in every   church and theology around.God's truth doesn't change. But even sincere people of faith interpret that truth differently and I don't believe that any one person had it exactly right.

May we all be a bit more understanding of each other; love and encourage each other, and know that as believers we are part of the one true church and much of the differences between us don't change the way we are to live and the fact that Christ died for all of us. And that is Good News.

Take care,
Jill
Posted by Jill in Kentucky at 9:48 PM